How do you train to be an actor musician? Article from The Stage, with comments from Rose Bruford alumni Stephanie Rutherford (AM 2015).

Leave on a light - Christian Powlesland (AM 2020) A music crowd-funding project in support of the NHS, organised by Christian and performed by the Rose Bruford virtual choir.

Haruka Abe (ETA, 2006) Stars in the video for Rather be by Clean Bandit ft. Jess Glynne.

Peter Addis (TA, 1993) Peter initially performed in many typical Actor-Musician shows such as Return to the Forbidden Planet; From a Jack to a King and Buddy on tour and in the West End. Later he was, for over seven years, the London Associate Director for the hit ABBA musical Mamma Mia!

Charlotte Bicknell
She has had a career in acting and performed in various musicals including touring the successful comedy musical act Kissing the goldfish. She now performs her true passion, jazz.

She is known for her portrayal of Carole King in Beautiful, and Winner of 2015 Olivier Awards for Best Actress in a Musical. She appeared as Sophie Sheridan in Mamma Mia! (2008-09) and in Girl from the North Country (2019-2020).
West End unplugged Ep.4 features, among other stars, Katie Brayben (mins 16-27) singing Tom Waits' Picture in a frame. She then chats about her performance in Beautiful when Carole King herself appeared on stage. And rounds off singing Joni Mitchell's Both sides now:

Emma Bull (LD, 2003)
She has worked as assistant to Kylie Minogue's Creative Director, on photo-shoots, video shoots and tours and during 2006/7 she was stylist and Head of Wardrobe for Minogue as well as Costume and Wig Supervisor on her Homecoming tour, directed by William Baker. She has also worked alongside Baker creating tours for Il Divo and Westlife and assisted him in styling the Britney Spears' Circus tour. Emma has directed numerous TV performances and tours for artists signed to Simon Cowell's record label, Syco, including Leona Lewis, One Direction, Harry Styles & Labrinth as well as many non-Sony artists including Ellie Goulding.
Profile in the Express newspaper

Neil Carter (AM, 1998)
He has written music for TV and film - including The muppets most wanted which he considers his best and most ridiculous work. After working in several London primary schools teaching music and drama, he joined the National Theatre as a learning associate. Later, with Luke Hollowell-Williams, he founded The Primary Shakespeare Company, an Arts Educational charity.
In 2019 Neil was Musical Director on And the rest of me floats (Bush Theatre):

Evening Standard Award Winner and Olivier Award nominee for The Light Princess.  She appeared in the premiere of musical Wonder.land, at Palace Theatre, Manchester and in September 2018, Rosalie began appearing alongside Patti LuPone in a revival of the Stephen Sondheim musical Company. She played the lead role of 'Bobbie,' reimagined for the first time as a woman.
Q&A with Rosalie Craig Q&A with Rosalie Craig
Don't rain on my parade (singing - audio only) from BBC Radio 2's Friday Night is Music Night - Independence Day concert on 4th July, 2014.

David Fallon and Sophie Bevan (both AM, 2019)
Book by Sophie Bevan; music and lyrics by David Fallon
A new musical piece inspired by the New York ACT UP activists, written as part of the 2019 L6 New Writing Season at Hoxton Hall.
By your side, from Life apparently, performed by James McDowall:

Listen to a couple of his tracks on SoundCloud.

James Hastings and Joel Nash (both AM, 2018)
Pardoned (2018)
Book by Joel Nash; music & lyrics by James Hastings.
A musical that dramatises the incredible life story WW2 codebreaker Alan Turing who was convicted for being gay. The show also shines a light on John Nicolson MP’s unsuccessful attempt to pass the Turing Bill through Parliament. The Turing Bill, which was rejected by the government, was a piece of legislation that would have cleared the criminal records of gay men who were convicted for crimes that are no longer illegal.

Jessica Jolleys (AM, 2019)
https://www.bbc.co.uk/news/uk-wales-50603566
Pantomime starring role for visually impaired actor-musician.
A visually impaired actor has won a starring role in a rock'n'roll version of the pantomime Jack and the Beanstalk. Jessica was born with two eye conditions she inherited from her father, who is now completely blind. But that has not stopped her from taking the stage as Jill at Theatr Clwyd in Mold, Flintshire.

Latekid is an artistic alter ego embodied by Darius McFarlane and truly brought to life when performed as a band alongside Jake Setters, Antosh Wojcik and Hamish McIntyre. Using music and poetry as the foundation for work – with influences from Jazz, Electronica and Indie – Latekid is a cross-arts experiment made not only for intense music gigs, but intimate and honest artistic and theatrical performances. To date they have performed  at Boiler Room, Tate Modern, Bush Theatre, Roundhouse and The Jazz Café.
Manor The Latekid (soundcloud)
Latekid at the Roundhouse (YouTube)

Joseph Millson
Played Raoul in Love never dies (2010), the Lloyd-Webber sequel to Phantom of the opera.
Why does she love me?
Just prior to lockdown he was playing Mr Banks in Mary Poppins.
Mary Poppins West End: first day of rehearsals:

Sam Palladio (AM, 2008)
Stars as Gunnar Scott in the ABC musical drama series Nashville, and was also lead singer in a band called Salt Water Thief.

Nailing the Nashville accent: two interviews 2012 and 2014
Nailing the Nashville accent and again
Scene and Duet 'It ain't yours to throw away" with co-star Clare Bowen (2014)
It ain't yours to throw away
Count on me (2015)
Count on me
Emma Berglund chats with Sam Palladio about his role as Prince Edward in The Princess Switch: Switched Again. Interview.
Actor Sam Palladio talks about his career so far and about ... pasties!  Lewis Nicholls Show

Lauryn Redding (AM, 2009)
Appeared in A comedy of errors at Shakespeare’s Globe in September 2010 'playing a range of parts and several instruments'. In 2017 she was part of the Watermill Shakespeare ensemble, and was in Oh what a lovely war at the Oldham Coliseum.

David Rodigan (TA, 1974)
Awarded and MBE for his services to music (2012) and awarded the Order of Distinction by the Jamaican government for his promotion of Jamaican music (2020).
Boiler Room #67 London set (c.60mins)
Boiler Room #67

Nick Sayce (AM, 2005)
Drum solo for 'Sunny afternoon'
"One of the parts I covered in Sunny Afternoon was Mick the drummer. I needed a drum solo for about two minutes under a spotlight so I needed something quick and hard, and I came up with this":

Starred as Jerry Allison in the Buddy Holly story, here performing That'll be the day (with Nick Sayce on drums):

Salka Sol (AM, 2013)
One of the Icelandic exchange students. Here singing 'Me and Bobby McGee':

Vikki Stone (AM, 2003 - left in 2nd year)
From 1999-2001 she was a member of the National Youth Music Theatre, performing in various productions then trained as an actor/musician at Rose Bruford College (leaving c.2003) and went on to do a postgraduate course at the Royal Academy of Music. She has composed several musical works including The Thing That Matters (2016) commissioned by the National Youth Choirs of Great Britain which received its world premier at the Royal Albert Hall and the orchestral work The Concerto for Comedian and Orchestra (2017), which was premiered at the Glastonbury festival in June 2017. She has also written the musicals The Zoological society  and Southbound.

Vikki Stone plays "The typewriter" by Leroy Anderson with the BBC Philharmonic Orchestra:

In 2012, Tull directed and edited Madonna Live at Paris Olympia which was broadcast live on YouTube.
Danny Tull YouTube channel
Includes the short film Havana with Rhianna and Elle; a trailer for the MDNA tour by Madonna and (nothing to do with music) the Armani Jeans advert featuring Cristiano Ronaldo.

Yngvil Vatn Guttu
Yngvil is a composer, musician, theatre director and performer, writer, educator and community activist.  Born in Oslo, Norway she left to study theatre and music at Rose Bruford College in London, graduating in 1991.  She went to Alaska on a theatre tour in 2002 and decided to stay. She ran several youth theatre companies before she decided to focus on her own projects – including EnviroBEAT, AntiFREEZE, ConNECT and Spenard JazzFest as well as her own music. The Boochever Award helped fund her debut album Akutaq (2010) and she recently released the sequel Plan B in Anchorage and Oslo (2011). Future plans include an album with songs and a recording with her favourite instrument, the Norwegian willow flute – and an Anchorage Jazz Festival.

Zoe West and the hanging baskets
Zoe West, Benjamin Rose, Adriana Perucca, Eben James, Jack Blakey (all AM 2017)
"The Hanging Baskets have been playing together since 2015 after meeting at prestigious drama school Rose Bruford College" 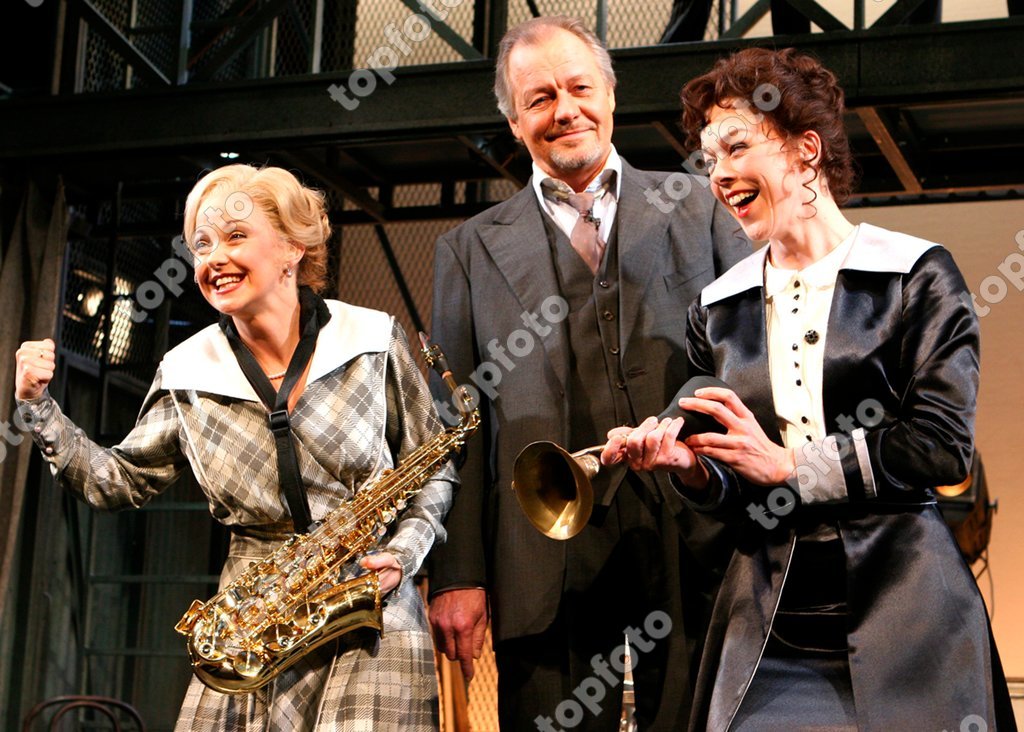 Sarah Whittuck (far left) as Lottie in Mack and Mabel at the Criterion Theatre, London, 2006.
Interview with Sarah as she takes on a role in Blonde Bombshells of 1943. Interview

Emma Wray (TA, 1986)
Best known for starring as 'Brenda Wilson' in the Granada Television sitcom Watching between 1987 and 1993, for which she also sang the theme tune What Does He See In Me?